Pocsi, a successful story from the Peruvian Altiplano

Pocsi is a small village on the Peruvian Altiplano, two hours far from Arequipa.
A small square, a little church, a crumbling town hall, just one two-floor house and lots of tiny, simple houses in the surroundings.
An old woman asks if we’re looking for someone: we have to meet Juanita, who will take us to the aromatic herbs farmers in Pocsi.
“You must be the buyer of the thyme, then! Our community would like to join this experience too: we saw that the Pocsi’s inhabitants had a great success.”
We ask her where is her community from. With her hand, she points at east: “Not so far from here, behind these mountains, just two hours by foot.”
Juanita has just arrived. She came here by foot too.
Of course the two women know each other and Juanita explains us that two months before a group of representatives of a near community reached them to learn more about the thyme cultivation.

Juanita gets into our pick-up and we climb together the winding, dusty street along the side of the mountain. We see some irrigated ledges all around and a plain of green undergrowth. It’s the wet season and the semi desert area is very green. Half an hour later we reach a community where a dozen of herbs farmers and their families are waiting for us. We are more than 3400 meters up to sea level, at the bottom of an impressing mountain chain, those peaks are over 5000 meters high.

The community is composed by a dozen of little houses. First of all, the farmers – both men and women – want to show us their aromatic herbs fields. We cross a stream that brings just a little bit of water during the wet season, while a herd of alpacas is staring at us with curiosity.
People here live on the breeding farm, on the quinoa and potatoes cultivation and – just since a few years – on aromatic herbs. The farmers take us to a panoramic viewpoint where we can admire the entire plain.

“Can you see those purple fields over there? It’s the thyme in bloom that we’re going to pick up the next week.”
We walk up to the fields, where they show us very proudly their cultivations, taken with extreme care: neither grass blades nor weed among the little thyme plants.

“Everything needs to be cleaned before starting the harvesting. We cut the sickles and we bring the harvesting up to the little house over there. When the herbs are dry, we tresh them and we sift the majority of the stems. After that, we bring the full sacks to the village, where they will be carried by the trucks up to Arequipa.”

After a long talking about the fertilization, about the selection of the plants to obtain the seeds and the correct irrigation of the cultivations, the lunchtime has come. We are invited to eat “cuy y papas”, grilled guinea pigs with potatoes: a real delicacy for the inhabitants of the Peruvian Altiplano.

During the lunch I ask the entourage how they bumped into the thyme cultivation. Anastasio, the oldest one, starts explaining us an extraordinary story. “Thirty years ago we were all hired men with no land. Sometimes we worked for a farmer, sometimes for the district for the mantainance of the streets and we often went to Arequipa to work just for a day. Many people moved to the big city, others always came back to the village.
Thanks to these different jobs, I got to know the region like the back of my hand because I went to work by foot, the bus was too expensive. That’s how I discovered the source you saw this morning above the fields. No one cultivated that area and no one lived there.
At that time, in Pocsi we had an incredible priest who worked hard for the hired men with no land. When I explained him about the source, he wanted to see it personally and I took him on the spot. He made inquiries about the owner and he realised that that land was owned by the Peruvian state. So he invited all the hired men with no land to get organised and ask the state the assignment of the lands. Thanks to the priest, twelve among us joined together and we obtained the property of the lands.”

“And what about the conversion to the organic cultivation?” – “We’ve never used chemical elements because we had no money. We have no neighbours who use pesticides. We learned how to compost and how to use the boil (a liquid organic fertilizer).”

“Did you come across disease in thyme?” – “Since now we don’t. We’re sure that this climate is perfect for this plant.”

“Which are your plans for the future?” – “This year we’re going to build a roof to dry out the herbs in the shadow. After that, we’ll probably start with the drip irrigation, because we haven’t got a lot of water. We would also like to start with new cultivations, probably with sage and rosemary.”

“The area was a semi desert, but the crucial factor were the source, our will to success and the help and the encouragement of the village priest. We began to uproot the undergrowth, to accumulate the rocks, to terrace the soil and to build irrigation canals. Little by little, we moved near the fields to cultivate potatoes, quinoa and other stuff for our families. After a lot of work during these years, we had our own fields and our own houses. However, we were still poor, because the prices for our products were too low.” 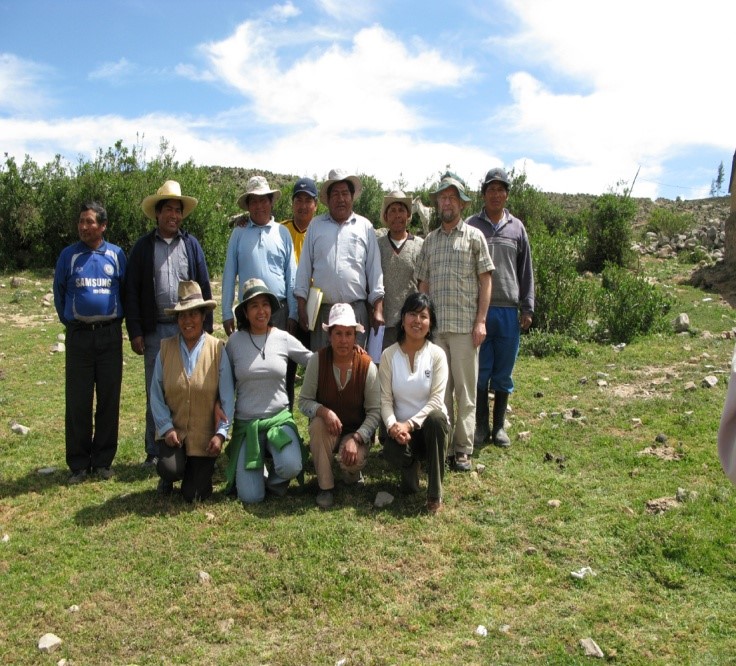 “About six years ago, we heard someone talking about the cultivation of aromatic herbs and there was the first approach with El Taller. You talked to us about the plants we didn’t know and you took us to small farmers who had acquired the essential experience. We discussed a lot to understand if this situation would have been good for us, if we would have made it through. We had the courage thanks to the fact that we had obtained a lot with our effort and the security that we had a Swiss buyer for the thyme, who had paid a good price for our products.”

“When we want to make something new, we decide all together. Five years ago we began all together with the cultivation of the thyme: at the beginning we had some doubts, because the plants grew very slowly and we wondered if the outcome would have been successful. With the potatoes, you can observe the plants growing, but with the thyme we had the feeling that nothing was happening for weeks. However, there was a smalla harvest, we dried out the herbs, we hit them and we filled up some sacks. Later on, you came here to take the sacks and we got the first money.

This year we’re going to collect about 4000 kg of thyme. Yes, we’re doing well right now. The most fascinating fact is that the young people want to stay here because they see a future.”